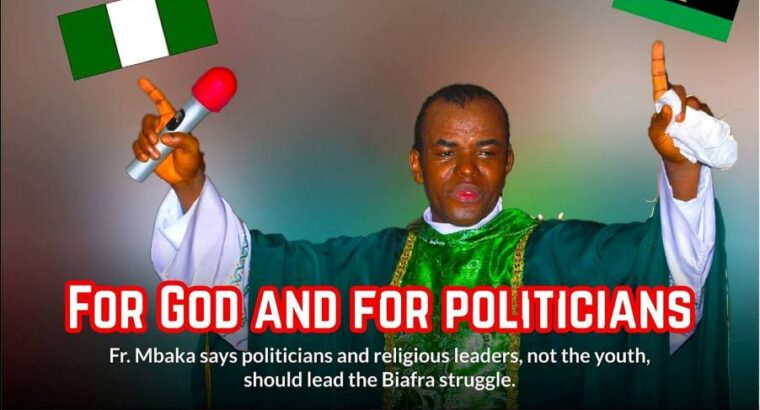 In what seemed like a complete surprise to the congregation at Rev. Fr Ejike Mbaka’s adoration ministry ground in Enugu on Wednesday 28th of April when he said that although he does not know Mazi Nnamdi Kanu nor have seen him before, but God almighty should bless and protect the leader of the Indigenous People of Biafra.

Recall that during the 2015 elections just before Nigerians went to the polls to choose who the next president becomes, among the main presidential candidates were Goodluck Ebele Jonathan (incumbent PDP as at the time) and General Muhammadu Buhari (main opposition from the APC), Fr Mbaka made a controversial prophecy which says that “Buhari is an answered prayer to Nigeria”. Since the inception of this present government, many Nigerians believe that that singular prophecy contributed to the installment of the APC administration in the corridors of power in Nigeria.

The 2015 election prophecy by the Catholic church priest, Mbaka was made amid rising Bokoharam insurgency in the Northeast as at then. Fast forward to 2021, the security and economic state of Nigeria has so degenerated that Nigerians began to question the God that Mbaka truly serves. People started asking questions like: Is Buhari truly an answered prayer?

“If Lawmakers refuse to impeach President Buhari and instead come for me, calamity will befall them”

Just yesterday, the man of God publicly called for Muhammadu Buhari’s resignation amid increased killings in the land. In his words, “I did not create Buhari, God did”. He went on to justify his new position by citing the bible where and when Saul was anointed, but God rejected him and in place of David – 1 Samuel 15:1, 11, 23.
However, the U-turn declaration and recent call by Ejike Mbaka did not go down well with many as they seem to accuse him on Twitter and Facebook for speaking from both sides of his mouth.

Similarly, he equally talked about Hope Uzodinma, the governor of Imo state and flag bearer of the APC in Southeast, saying he has refused to pick his phone calls ever since he became the Executive governor of Imo state in February 2020. He went on to blast Buhari for needlessly Killing Ikonso instead of fighting Poverty, Illiteracy and Unemployment in the country.

In what can be called a Wednesday full of surprises at AMEN, Rev Mbaka showers praises, prayers and commends the leader of IPoB, Mazi Kanu for his resoluteness and consistency in protecting and defending his people from all manner of arrows from the wicked ones. As striking as it may be, the Catholic priest said that he has not met with or seen Kanu before even when he prays that God protect him wherever he may be. Meanwhile, Nnamdi Kanu is the Director of Radio Biafra and leader of IPoB, a group seeking for referendum to decide its fate in Nigeria.