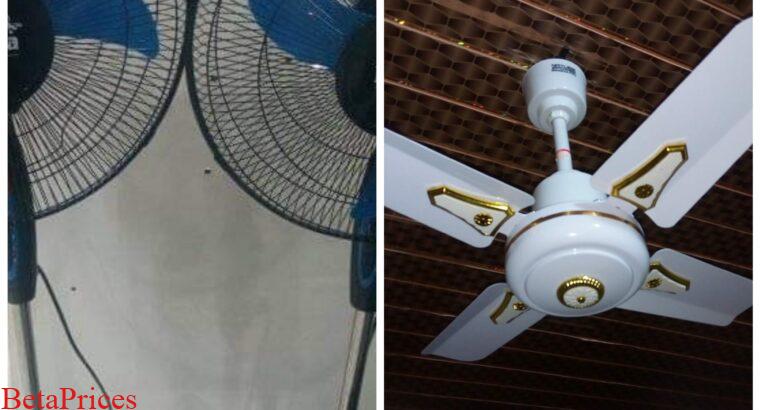 Price List of Standing and Ceiling Fans in Nigeria 2022

Very soon, we’ll be approaching the dry season and you might want to consider adding more fans to the ones you already have, either at your workspace or home. Today, we’re going to consider ceiling and standing fans together with best top producing brands as well as their prices. The first brand we’re going to be looking at is OX. When it comes to quality products, innovation and years of experience, the OX brand comes on top and it is no wonder that we’re going to review them first. So, let’s take a look at their products more closely.

There are several types of OX standing fans but the two most common types are the OX ’18’ series and the OX industrial series. So, depending on the usage, you can decide which one to settle for. The price ranges from N12,000 to N55,000, depending on the type. And for the ceiling fan, there are also two types which are the giant-sized blades and the small-sized blades. For the small size, the price ranges from N12,000 to N15,000 and the big size is about N25,000.

Panasonic brand is quite versatile when it comes to producing quality cooling products. Not only does Panasonic produce ceiling fans, standing fans, rechargeable fans, they also produce ACs too. But since that’s not our point of focus in this article, we’re going to be considering the ceiling and standing fan. So, let’s dive in.

As usual, Panasonic didn’t disappoint as there are different types of the ceiling fan. Some of them are a 3-blade ceiling fan, 5-blade ceiling, wifi 3-blade and LED series. Some of the key specifications of this product include- – Led lighting – 4-mode selection – wifi mobile app control – DC motor – Reverse function – Sleep timer – Yuragi – LCD remote control – Preset speed The prices of these fans ranges since the models are quite different from one another but usually, they cost between N21,000 and N50,000.

Just like the ceiling fan, their standing fan also comes in various models and sizes. We have the 407w standing fan, 407w 220 volts, rechargeable fans, wall fan, orbit fan, and water fan. Some of these fans cost as low as N40,000 while others are as high as N95,000. Now, until the next brand we’ll be reviewing.

The list is not complete without mentioning LG as a brand. Since we’ll be reviewing two types, let’s divide them into two categories.

Although, it can’t be disputed that LG fans come in different sizes but the most common is a big size and small size and sells for N15,000 and N7,500 respectively.

Some of the key specs of the most common type of LG ceiling fan includes- – Dual wings for natural flow – Inverter motor for low noise – Remote control and LED display – Sleep mode – ThinQ – Quieter operation of blades. And this amazing piece goes for N100,000. It’s quite expensive, yes, but there’s an assurance that you’re getting value for your money.

Now, let’s look at solar standing and ceiling fans. Solar fans are becoming a thing these days as blackouts from electricity distribution companies can be frustrating. As long as there is sun, all you need to do is to charge and boom, you have it. Some of the benefits of using a solar standing and ceiling fan include the following: – Your solar fan comes with a charging port for mobile phones. – It can work for as long as 8-9 hours after charging. – As long as it is being handled with care, it can last for as long as you want it. – It is safe from overcharge and discharge conditions, something that often occurs with non-solar rechargeable fans. – It is easy to move both indoors and outdoors. All of these and many more make the solar fan a considerable option when shopping for a fan. It is also the same for ceiling fans as well and the price of standing and ceiling fans ranges from N5,000-N48,000 and N13,000-N60,000 respectively. Now, until the next brand we’re reviewing which is:

We have the Polystar industrial fan and rechargeable fans. The bigger the size and the purpose it serves, the higher the price. You can get a Polystar standing fan for as low as N20,000 and as high as N45,000.

The Polystar ceiling fan comes with a 5 speed capacitor regulator with a 100% copper wire motor. This product goes for N58,000 in the market today. The next brand on the list is: Century standing and ceiling fan.

The century standing fan can last up to 6-9 hours after charging and also comes with a LED light. It also comes with a USB port and remote control. The price goes for N33,500 in the market today. Other sizes come at a lesser price but it might be a hassle to easily access them. However, the most readily available of them all is what we have seen just now.

Century ceiling fan is a 3- blade super breezy fan in a slim and compact mode which makes it silent when in use. With a 3-year warranty, century fan is a brand that you can trust. This product goes for as low as N13,000 in the market.

If you notice well enough, some of the brands we’ve reviewed produce both standing and ceiling industrial fans as well. Asides from them, other brands that produce industrial fans and they are Dominion electronics, ORL and Binatone. The prices of these fans depend on the brand and other factors which includes the exchange rate and the outlets where you’ll be purchasing them from. Usually, industrial standing fans cost between N20,000 to N70,000 while the ceiling fan goes for N18,000-N50,000. Now, to the last brand we’re going to review today which is Fanafrik.

Fanafrik is known for its relatively affordable products which makes it a go-to brand always. Therefore, let’s take a look at each one. Just like other brands have different types and models, so also does Fanafrik but regardless, you can get a standing fan for as low as N9,000. Pretty affordable, right?. It’s pretty much the same for ceiling fans, although these come at a higher price of N15,000 as the lowest price. Indeed, we have saved the best for the last. 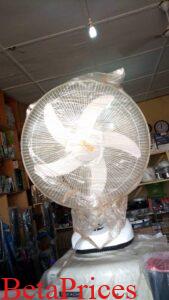 All the brands’ reviews in this article are by all standards the brands that produce the best standing and ceiling fans.All that is left for you to do is to make a choice of which one of them you want to settle for.

If you have used any of the products reviewed before, tell us about your experiences. And if you’re looking forward to getting any of these products, which one will you go for and why?. Let us know in the comments section and we’ll be glad to read them all.