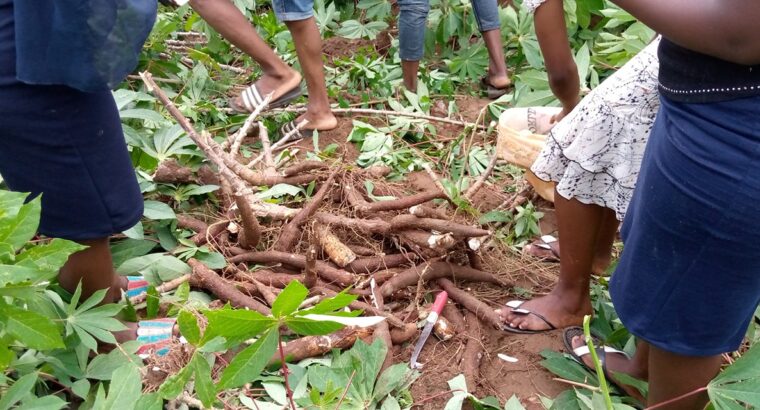 Cassava is a woody shrub of the Spurges family which are grown as perennial vegetables in the tropical and subtropical regions of the world mainly as an edible carbohydrate-giving starchy tuberous root. In west Africa, planting and harvesting of Cassava is done annually by farmers in the rural and suburban areas mainly for economic reasons.

In a year, there exist two seasons when farmers cultivate Cassava stems. The first season is called Early planting while the second is called Late planting. Early planting of cassava begins in February and ends in June while Late planting starts from October till December each year. As true as this maybe, rainfall has always been a major deciding factor as to when a season begins and ends.

Depending on soil fertility, rainfall and other favorable weather conditions, Cassava stems take at least 6 months to bear tubers underneath it. That period can be extended to 10 months to 1 year to allow the Cassava tubers to fully mature. If left unharvested after a year and 3 months, the tubers might begin to depreciate in quality depending on the Cassava variety. Some may begin to rotten inside the ground leading to loss of money in its raw form.

After a successful harvest, a subsistence farmer would process it for family use. If you planted for commercial purposes, then you will definitely be making arrangements on how to sell your products. Now cassava has many By-products or even derivatives you can sell and make money. The more money is usually made in selling these processed or refined products of Cassava.

Price per tonne of Cassava

The truth is that if you sell your freshly-harvested Cassava tubers to retailers or manufacturers who are going to use it to produce anyone if the above-listed byproducts, you will make your own little money as the cultivator and then loose the money you would have made for processing it yourself.

Help us stay up to date by telling us what Cassava currently sells in your locality.