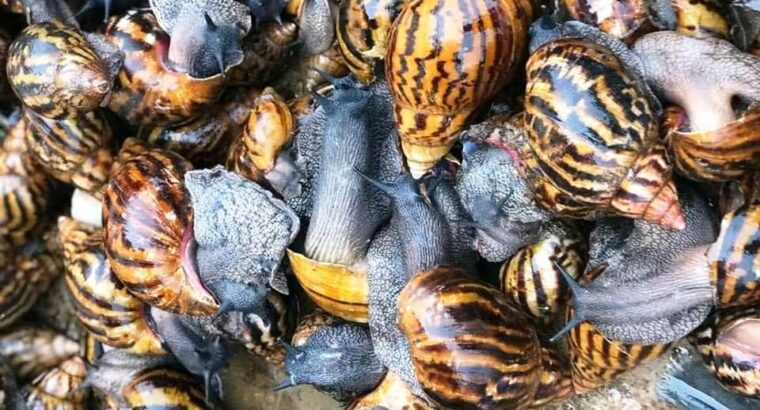 For Sale: Price of Snail Slime per kg, litre in Nigeria

As the market rush for the externally secreted mucus by Snails called Slime continues to intensify internationally due to its increased adoption in the beauty and make-up industries, cosmetics and the likes, sellers all over the world are tasked with meeting up with supply demands of buyers on their waiting list.

Suffice it to point out that a Snail produces little quantity of this slime. Nevertheless, Snail slime has become a top export commodity with huge economic benefits that is exported on a large scale from one country to another. This is usually done with the help of a machine known as snail slime extractor. The cost of this machine depends greatly on its capacity, however the wholesale price ranges from $1,440 to $80,000. Going forward, Snail slime is a very expensive commodity and the market is worth over 360 million US dollars globally.

However, there are natural ways of extracting slime from snails. A jumbo sized African giant snail secretes about one ml of slime when alive, It produces about 10 ml when killed. The good news is that you don’t need to kill a snail to extract its slime.

Snail slime contains antioxidant properties which is very good for human skin. This is the reason it has very high demand in the cosmetic industry. Snail slime is also known as snail saliva, and it’s very good for the skin. Below are some of it’s benefits or uses.

The Slime in Snails aids them in crawling. They discharge slime as they crawl. Secondly, it also helps them to soften hard food, when they want to eat something that’s not wet or hard, they hydrate it first with their slime.

Utmost care should be taken to avoid Dogs from coming in contact with these Slime. This is because the slime contains lung worms which can be easily contracted by dogs when it swallows the slime. Once the slime has been extracted, preserve it using a Refrigerator.

There are a few trusted commercial-scale snail slime dealers in Nigeria. For that, BetaPrices recommends MU-IMMACULATE AGRO SUPPLIERS with CAC Reg. No. BN 2576034 and head office located at No. 40B Olaiya Street Agbara/Morogbo off Lagos Badagry Expressway. Official Email is [email protected] and official phone number is +2347038408983. The company specializes in supply of agricultural produce. They export snails (live and processed). They also deal on snail slime.